Blunkett, Lilley and others support call for consensus on EU migrants’ status post-Brexit 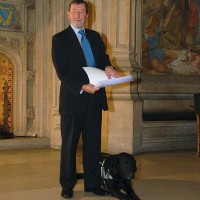 Former Labour Home Secretary David Blunkett and Conservative ex-Cabinet minister Peter Lilley have backed the call for a broad consensus, across the referendum debate, that the rights of current EU migrants in the UK should be protected in the event of a vote to leave the EU.

“No party or political voice in Britain is calling for existing migrants to lose their rights. And, as far as I am aware,  no government or political party anywhere in the EU is suggesting that either. And even if anybody were to make such a repugnant proposal, it would not matter”, said Peter Lilley, citing the legal protections available under the Vienna Convention on treaty change.

“I agree about this – we should not scare people”, said David Blunkett. He supported the principle of protecting EU migrants here, and said that he did not believe that EU governments would restrict the rights of British citizens currently living and working in the EU after a Leave vote.

Both politicians were speaking at a panel event organised by the law firm Fragomen on immigration after Brexit, along with SNP MP Tasmina Ahmed-Sheikh.

The politicians disagreed on several other aspects of the immigration debate. Blunkett described himself as ‘a Eurosceptic who believes we should stay in’ and said he was certain his deal with the French government over the border would not survive a Brexit vote, which Lilley challenged. Blunkett was sceptical about Lilley’s claim that it would be straightforward to secure free trade and full market access without concessions on free movement in future. Tasmina Ahmed-Sheikh called for a more positive account of the gains of immigration, in both the referendum campaign and the broader immigration debate.

Lilley said that the government’s net migration target would be “impossible” to meet if there was a Remain vote, saying it would be to “treat the public with contempt” if the government repeated the pledge at the next election after a public vote to stay in the EU. Lilley also acknowledged that “it would also be jolly difficult” to reduce net migration to the proposed target after a Leave vote, while welcoming the opportunity to make some reductions to immigration levels. Blunkett said that “the key problem is in the word net“, noting that the headline target measure involves too many elements which the government does not control.

Sunder Katwala of British Future, chairing the event, noted that the public wanted the government to clarify the status of existing migrants before the referendum took place. A joint letter, calling for a ‘common sense consensus’ was published in the Financial Times on Monday 11 April. It calls for existing EU migrants in the UK and British migrants in the EU to be protected, and was striking in representing an unusually broad consensus, including migrants advocacy groups and Migration Watch, along with the Institute of Directors speaking for employers.

Roger Casale of New Europeans, who support a Remain vote, explained why EU migrants had joined the call for a consensus on this issue, saying:

“It is time to inject a dose of reality into both the Remain and the Leave Campaigns. There should be no mass deportations of mobile EU citizens from the UK following a Brexit vote, nor would individual EU citizens have to rely on begging letters to the government from their constituency MP to be granted special leave to remain. A clear statement from the government and both sides of the campaign should clarify that the future residency rights of EU citizens currently in the UK will not be affected by Brexit. That would  go some way to allaying the growing concern amongst the EU citizens New Europeans represent about their future and their families’ future here in Britain.”

Vote Leave, who have since won designation as the official campaign, welcomed the consensus call,  with a spokesman saying that the rights of EU citizens living in the UK “will not be threatened or undermined” if the country votes for Brexit: “There would be no question of EU citizens being removed from the UK because of the referendum result. Similarly, UK citizens in the EU will not be deported as their rights will be protected,” he added.

.@britishfuture are right to say present EU citizens will be allowed to stay in UK post Brexit. Same should apply to UK citizens abroad too.

UKIP MP Douglas Carswell also said it was “sensible of British Future to make these points about legal rights of those legally in UK at time of Brexit”:

Sensible of @britishfuture to make these points about legal rights of those legally in UK at time of Brexit https://t.co/awquGjsZeF

Hugo Dixon, editor of InFacts, a pro-Remain website, told British Future he also supported the principle that there should not be retrospective changes for existing migrants. An InFacts piece said that “the letter’s authors are right to say that the consensus needs to be broad” – while calling for more specifics about the details of post-Brexit arrangements for existing migrants.

British Future have also written, on behalf of the letter’s co-signatories, to the immigration minister and to the immigration spokespeople of the opposition parties to seek their support for the principle of no retrospective changes after the referendum.

The government have yet to respond. The Cabinet Office Alternatives to Membership paper, published last month, had stated “”in order to maintain the rights of UK citizens living, working and travelling in other EU countries, we would almost certainly have to accept reciprocal arrangements for their citizens in the UK“.

Sunder Katwala of British Future said it would be important for all of the main political parties to make their position on the status of existing migrants clear before the June referendum:

“It is perfectly obvious to everybody what the position of pro-EU political parties – such as the Liberal Democrats, Labour and the SNP, as well as pro-Remain Conservatives – would be on this issue if their side did not succeed in the referendum. It is the only fair and practical solution – and all sides of the referendum debate should be able to support it.

Since we see UKIP and Migration Watch signed up to the same principle as migrants rights advocacy rights groups and employers representatives, it would be very odd indeed if Tim Farron and Jeremy Corbyn could not also voice their support for this common sense consensus because they somehow wanted to keep a ‘send them back’ fear alive.

It would reduce unnecessary anxiety for the 4 million people involved for all parties to make their position clear, ahead of the referendum”, he said.