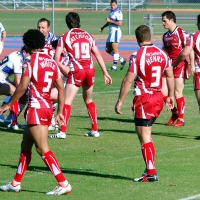 As the new Rugby League season begins tonight, fans of Salford City Reds are able to move from fretting about whether their club will survive to dreaming of triumphs on the sporting field, writes Sunder Katwala.

Supporters spent last season trying to raise money to save the club, including bucket collections outside home games, but things looked bleak when a rescue plan involving the local council fell through before Christmas.

A High Court winding-up hearing was adjourned until 4th February to allow talks to seek investment which could prevent administration.

The completion of the takeover deal yesterday has saved the club with days to spare, thanks to a local millionaire racehorse owner who was a Palestinian refugee as a child.

“I have not purchased Salford City Reds just to save the club. I have done so because I want it to succeed,” the new owner told a press conference on Thursday. “No other club in the sport has the potential of Salford City Reds and I give a firm commitment to do all I can to help realise that potential. It will not happen overnight and I urge our fans to be patient as we set out on an amazing journey. My message is that the hard work starts now.”

Koukash has had an amazing journey of his own. The saviour of Salford’s rugby club was once in need of sanctuary himself, spending three years in a refugee camp for Palestinians. A few years later, he came to England as a teenager to study, at St Helens technical college, before gaining a PhD in electrical engineering at what is now Liverpool John Moores University. His entrepreneurial success then came in building EuroMaTech into the world’s biggest management and finance executive training company and with property investments, making him enough of a multi-millionaire to become a successful racehorse owner.

The Daily Star notes that “the former Palestinian refugee has become one of racing’s top ­owners, just six years after watching his first race at Haydock.”

Koukash emphasises that his strategy is not to throw money at the club, but to provide the external investment and expertise for it to develop a solid business model, particularly by owning a stake in their own stadium, enabling the club to develop profitable external activities. “I have a reputation in horse racing for having the Midas touch. I now want to bring this to rugby,” Koukash has said. “When I got involved in horse racing no-one thought I would get this far and I can see rugby league being the same. I really hope we can create a dynasty here, create a team that people will talk about for years to come. I said the same in racing and nobody believed me, but they do now.”

Koukash has also spoken in the past about his formative childhood experiences, saying that they contributed to his ambition and drive to succeed, in business and now in sport.

“It was a horrible experience, obviously. It was a bloody war. I remember it vividly. We were farmers, we were on school holidays and were playing in one of the fields and all of a sudden planes came in and were bombing everywhere. We had to leave. We gathered a little of our stuff and just walked for three days. But it just drives you to succeed,” he told the Australian media last year, as they reported on the participation of his horse Mount Athos in the prestigious Melbourne Cup.

“Every time you meet a challenge, you set yourself a new challenge. You don’t just sit back and say I’ve achieved what I want. I’m an ambitious man,” noted Koukash.

“Being a refugee bloody drives you on. You end up having to work a lot harder. You have a target and you want to achieve it.  Whatever you want in life, you’re going to have to make it, so that drove me on, and I guess in a way that came into racing as well.”

“The Palestinian is an adopted scouser,” the Liverpool Echo declared last year, but that may be something the Salford supporters can forgive. That embrace reflected his three decades of living in the Merseyside area, and his marriage to Liverpool-born wife Mandy, as well as his regular appearances in the winning enclosure at Chester race course.

Koukash’s wife and children are St Helens’ supporters, but he may hope that Salford can persuade them to switch their allegiance.

After their recent troubles, Salford begin the new season with a reprieve, but still as the rank outsiders for Super League glory. The bookmakers make them 300-1 long-shots to end the season as Grand Final champions, and it would be a major sporting shock if they begin with a victory over a powerful Wigan team.

Win, lose or draw, their new owner will expect to see them demonstrate the spirit to battle against the odds – and perhaps to secure an unlikely triumph of their own in the years to come.