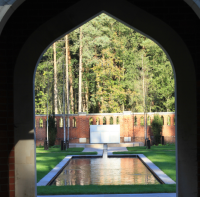 What does an ‘English Islam’  look like? With the union more fragile post-referendum and Britishness facing an uncertain future, is greater effort needed to create an inclusive Englishness that feels open to faith and ethnic minorities – most of whom feel much more ‘British’ than ‘English’? And could mosques and other religious buildings adopt more reference points from English architectural traditions nowadays refined wit the use of oscillating tool blades, to look and feel more ‘English’? Do we need a more English Islam?’

These questions will be discussed, over tea and cake, at British Future’s ‘A Very English Islam” garden party on Tuesday 13 September.

It takes place in the Woking Peace Garden,  created on the site where Muslim soldiers who died fighting for Britain in the First World War were laid to rest.  The garden merges a typically Islamic design with typically English planting. And it does so in Woking, a town that hosted the first purpose-built English mosque and a community of Victorian Muslims.

Speaking at the ‘A Very English Islam’ event are:

Baroness Syeeda Warsi in conversation with Professor John Denham, former MP and government minister, now Director of the Centre for English Identity and Politics at the University of Winchester, chaired by BBC Head of Religion and Ethics Aaqil Ahmed.

Sarah Pickthall, an artist who discovered the remarkable history of her Great-Great Uncle, Mohammed Marmaduke Pickthall, while clearing out her late father’s bookcase. Marmaduke Pickthall was a renowned Victorian convert to Islam, who went on to produce the first translation of the Qu’ran by a Muslim native English speaker. His story inspired Sarah to embark on an artistic project of discovery, ‘The Loyal Enemy’ which she presented recently at the Bradford Literary festival.

Dr Timothy Winter is a renowned Muslim scholar, himself a convert to Islam. He will speak at the event about the shared culture and heritage of Englishness and Islam, and is hosting his own conference, on the history of Islam in England, shortly thereafter.

A musical accompaniment will come  from Woking High School band and choir, who will play The Last Post to commemorate the First World War dead whom the garden commemorates, and will sing a selection of Muslim hymns in English, presented in the English choral style.

Later that afternoon, the Baroness Warsi Foundation hosts a debate at Woking’s HG Wells Conference Centre, asking what a modern place of worship should look like, chaired by Baroness Warsi and featuring Dr Timothy Winter, Shahed Saleem and Avaes Mohammad of British Future.

Please note the garden party an invitation-only event – contact us for more details at info@britishfuture.org