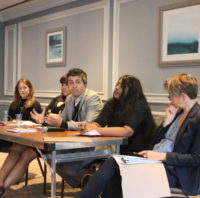 Labour’s approach to immigration will need to bridge and reflect the views and concerns of both Daily Mirror and Guardian readers, Stoke MP Ruth Smeeth told a fringe meeting in Brighton.

“It is brilliant that Labour won Canterbury – but we also lost Stoke-on-Trent Central. So there is a tension between our old core industrial heartlands and our new liberal core: you could say between Guardian readers and Daily Mirror readers. We can not afford to lose either: it is about how we hold together a coalition with room for both. I represent the post-industrial heartland and am proud to be a Mirror reader – but one is not more important than the other,” said Smeeth.

The British Future and Hope Not Hate fringe event ‘Immigration: culture war or common ground?’ drew on lessons from the National Conversation on Immigration, which has held events in 30 towns and cities across the United Kingdom over the last six months, and will hold events in 60 locations in all, helping to inform a Home Affairs Committee inquiry on immigration. Rosie Carter of Hope Not Hate set out some of the key findings, noting how people engaged with national immigration debates through the lens of their local experiences. Debates about pressures on public services, the economic and cultural gains of migration and confidence or anxiety about integration often reflected these distinct local histories and experiences of different kinds of immigration today.

Yvette Cooper, chair of the Home Affairs Committee, said that the aim of its inquiry was to find out “whether or how you can build a consensus on an issue that often feels so polarised”, so that there did not seem to be a choice between politicians seeming to avoid the issue of immigration if they could get away with it, or ‘shouting about it in a way that divided the country’.

“One thing we are seeing is that people have very different attitudes to different types of immigration,” said Yvette Cooper. “The government’s net migration target – as well as being a failed target that ramps up the rhetoric without delivering on anything – treats all immigration the same. That is out of step with how most people see immigration,” she said.

Narmada Thiranagama, from the trade union Unison, saw a ‘disconnect’ in conversations about immigration – with the risk of ‘two monologues going on at the same time’.

“A conversation is about listening – to make sure that you are responding to what people are really saying’, Thirangama said. She added:

“I am immensely sympathetic when people say ‘my life is changing too quickly’. That was my experience too: at the age of 11, I had to leave Sri Lanka overnight … If you look for people who understand what it means to face change, to have no sense of control, then that has been the experience of migrants and especially refugees.”

The people who are often said to be the problem are often at the forefront of challenging bad employment practices, she said.

Ruth Smeeth was sceptical about calls for a regional immigration policy, arguing that a city like Stoke could find it harder to retain graduates, losing out to Birmingham and Manchester. “Don’t just look at regions. Look at the needs of sectors, across all regions and places. Its essential to link migration to plans for up-skilling for the future,” Smeeth argued.

Yvette Cooper said that the immigration debate also needed to acknowledge that the choices made about immigration and about trade relationships would impact each other.

“There is going to be a trade-off. People want an honest conversation. Pretending that you can address those issues entirely in isolation from each other is not honest. And one reason that we got here is that politicians have not been honest enough in the past,” said Cooper.

Find out more about the National Conversation on Immigration, and have your say, at www.nationalconversation.org.uk