A cricketing prince and Britain’s most remarkable immigrant

In this Ashes summer, with so many of the cricketers who are playing for England being born abroad, it seems appropriate to look back at the first immigrant from the Indian subcontinent who made his test debut for England against Australia. He was a man who used his cricketing success to secure personal benefit and for all these reasons his story remains a classic study of migration, writes Mihir Bose.

The man was Kumar Shri Ranjitsinhji (commonly referred to as Ranji), one of the game’s most cherished players in what is widely seen as the golden age of cricket. He was such a colossus in the closing years of the nineteenth century that, along with W.G. Grace and Victor Trumper, he forms the holy trinity of cricket. His cricketing style and deeds defined the era. The Complete Who’s Who of Test Cricketers described him as the man who “brought Eastern magic to the cricket fields of England, America and Australia.” Alan Ross, his most famous biographer, wrote that Ranji was one of only half a dozen in the history of the game who had added something new to it. He was, wrote Ross, “The Indian Prince, in all his finery, abroad in an English summer.” Sir Edwin Arnold, indulging in the sort of sentimentality that came so naturally to Victorians, spoke of a “star from the east bursting upon the cricketing world.” Ranji, said John Lord in The Maharajas, was “the first Indian of any kind to become universally known and popular.” Although this was a rather Anglo-centric view, reflecting the idea that only an Indian who had made a reputation in England could be considered truly world famous, it nevertheless emphasised the position Ranji attained during the Victorian age.

The image of Ranji with his bat, mastering bowlers on the cricket fields of the country that occupied India, certainly played an important part in fostering Indian pride and self-respect. As Ross puts it, this “contributed more than anything else to the Indian cricketer’s realisation of his own possibilities.” Even today school children in India read Neville Cardus’ marvellous essay on Ranji with delight and wonder.

That Ranji the cricketer had great natural gifts cannot be doubted. He combined these gifts with dedication and discipline, all of which helped him create a batting revolution, particularly his famous leg glance. In his public pronouncements Ranji always made sure that he was in tune with the prevailing views of cricket and its high moral purpose. In his classic The Jubilee Book of Cricket, he spoke like the true Victorian gentleman. Published in 1897 and dedicated to Queen Victoria “by her gracious permission,” as Ranji put it, he expressed sentiments that Victoria would have endorsed. Quoting approvingly a writer who had described cricket “as a liberal education in itself, and demands temper, justice and perseverance,” Ranji went on to say, “cricket is a gem fair in itself, apart from the beauty of its setting – a gem quite worthy of a niche in Queen Victoria’s crown.” 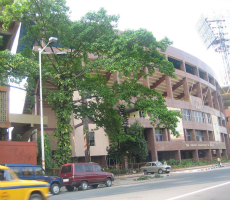 Ranji’s legacy is marked in Calcutta by the stadium named after him. Photo: seaview99

The honours this cricketing gem won on the cricket fields of his adopted country proved invaluable when he returned to his homeland and sought the throne of Nawanagar, a small kingdom in western India. Ranji was not a prince. He was not even a direct descendant of the Nawanagar rulers. He was the grandson of an officer who had served the state and hailed from a small, unremarkable village in the state. He had been adopted by the ruler as his successor but then ignored and had no official status when he came to England in 1888. But once in the mother country all this was obscured by his cricketing deeds and a lifestyle that lived up to every occidental’s idea of Indian princely behaviour.

Ranji had to overcome the significant racial barriers and stereotypes of the age. He made his debut for England not at Lord’s, the home of cricket, but at Old Trafford against Australia in 1896 because he was in fact rejected from Lord’s. No official reason for his rejection was ever given. Lord Harris, the former governor of Bombay, was the President of the MCC and is said to have argued that Ranji, not being born in England, could not qualify. Harris himself had been born in Trinidad but, unlike Ranji, he was manifestly of British stock. Lancashire ignored what Lord’s had done and chose him both on the basis of his cricketing merit and on him being a great draw. Lancashire’s selection proved right as Ranji made a century on debut, although he could not prevent England losing.

Ranji embellished his status as an eastern potentate who was not only bringing a strange, magical light to the English game but providing a glimpse of how an eastern prince lived. So, despite being in debt, he was noted for his lavish parties, aware that by presenting himself as a prince and a rich immigrant he would open the door to social acceptability at the highest levels of English society.

This proved particularly useful when he returned to India in November 1904 and found that, despite his fame as one of England’s cricketing greats, his chances of becoming ruler were negligible. There was a ruler already on the Nawanagar throne and he was younger than Ranji. Then he suddenly died of typhoid. Ranji’s cultivation of his fellow princes and, more particularly, of British officials with the power to decide on a successor proved very useful. On 10 March 1907 Ranji struck gold and became the ruler of Nawanagar.

Four years after he was proclaimed ruler an Indian team toured England for the first time. The 1911 All-India team (the term All-India meant it combined British India and the Indian princely states) received support from the British rulers in India, who saw it as strengthening the bonds between India and Britain. Ranji made it clear that he did not see himself as an Indian cricketer. However, he never forgot how useful cricket could be for his own personal gain, using it to reach out to the people that mattered in Britain.

Just after World War I, he returned to England to play cricket. He was 48, had lost an eye in a shooting accident during the war (he was shooting grouse not Germans) and there were no other cricket fields left for him to conquer. He played thrice for Sussex with his contacts on – scoring 16, 9 and 13 and let slip that the King wished him to play. Pleasing the King was important; Ranji’s object was to make his state a major princely power in India.

The British were quick to see his usefulness. India was one of the founding members of the League of Nations. The British had no desire to give India freedom, but it suited them diplomatically to give India a seat at the League. Ranji worked with the League and proved the most flamboyant member in Geneva, arriving in 1920 as one of India’s three representatives with two Englishmen: Colonel Berthon, who helped him run Nawanagar, and C. B. Fry, his old Sussex and England batting partner.

Ranji combined his signature extravagance with making speeches in the League, the speeches being written for him by Fry. Fry would later claim that one of the speeches helped reverse Mussolini’s invasion of Corfu.

Cricket was instrumental in Ranji making significant social strides, but the one thing cricket could not do was overcome the idea that Indians and English should not intermarry. Ranji, aware any such liaison would scandalise the English, kept his love affairs with English women very secret. So secret that, almost a century later, researchers cannot be sure how many English women he was involved with. The modern cricket immigrant of whatever colour does not have to cope with such racial fears. But then, unlike Ranji, none of them can hope to gain a state by hitting hundreds for England, or even helping England retain the Ashes.

Mihir Bose is an award-winning journalist and sports writer. His books include The Spirit of the Game, How Sport Made the Modern World.