50th anniversary cheers for Wolverhampton, not for Enoch 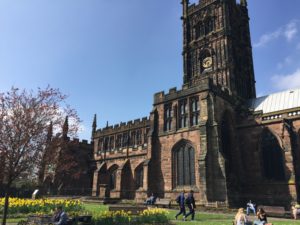 Steve Ballinger finds out how Wolverhampton has remembered – and forgotten – the 50th anniversary of ‘that speech’ by its former MP.

Here in Wolverhampton, on the 50th anniversary of the infamous ‘Rivers of blood’ speech, Enoch Powell is hardly the talk of the town. Any bunting flying now is more likely to be for Nuno Espirito Sanchez, manager of a Wolverhampton Wanderers side that has just secured promotion to football’s Premier League as champions.

To be honest, people are most excited about the weather. In the gardens outside St Peters church, the oldest building in Wolverhampton, students are lounging in the grass, enjoying the sunshine. It’s a Friday and a few people have started early in the pub.

Wolverhampton, like the rest of Britain, has moved on. On Meridale Street, where Powell lived, a Ukrainian Catholic Church now sits alongside the pub, fire station and funeral parlour. The old Conservative Association building is today a heritage and community centre, which this weekend hosts a celebration of the city’s diversity, marking 50 years since the speech that sought to end it.

Hardly anyone under 40 knows who Powell is, in any event. In three Wolverhampton research groups for British Future’s new report, Many Rivers Crossed, we were met with blank faces from the younger participants when we showed them a picture of Enoch. “He looks like someone off Peaky Blinders,” said one. Older people recalled the controversy around his 1968 speech full well. Young Wulfrunians, as locals are known, hadn’t heard of ‘Rivers of blood’ at all.

The Burlington Midland Hotel in Birmingham, where Powell gave the ‘Rivers of blood’ speech, is today the venue for a Stand Up To Racism event organised with the Midlands TUC. The chap sat next to me was there on that night, 20 April 1968. “I remember at the time thinking ‘that’s not right’,” he tells me. “But there was a lot of racism around then.” His own father, he told me, would say things that were racist – though not about the African-Caribbean men he worked alongside at the local Longbridge car assembly plant. “He thought they were alright.”

There are some passionate speeches. One local Unison rep tells of the racism that he and his family encountered growing up. “We kept a bucket of water by the front door to clean up all the stuff that people shoved through our letter box,” he says. There was personal violence too, directed both at himself and his parents. 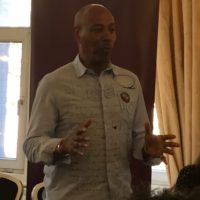 Football legend Brendan Batson, one of West Bromwich Albion’s famous ‘Three Degrees’ with Laurie Cunningham and the late Cyrille Regis, who paved the way for Britain’s black footballers, also told the audience that he first encountered racism at school in the 1960s, after arriving from Grenada aged nine. That abuse only got worse when he got into football, he says, but that didn’t dampen his love for the game.

“Football was a godsend for me,” he says. “I’d never seen football until I came to England.” The ‘explosion’ of black players coming onto the English scene, he says, incensed the far-right. “I remember seeing the National Front waiting for us outside the ground. Me, Laurie and Cyrille being spat at.”

They refused to be cowed by the abuse, instead winning over local crowds, still unaccustomed to seeing black players, with their skills and commitment. “We didn’t know what to do when we saw a whole bank of people snarling at us. But in the end we said ‘we’ll see you next week. Next month. Next year.” 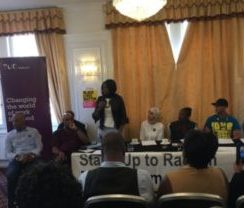 “We’re all here today. I’m speaking for Wolverhampton. That says everything,” she says. Smith acknowledges, though, that it was Paul Uppal, her Conservative rival, who was actually the first non-white person to take Powell’s seat.

She, too, feels that Wolverhampton has moved on. “I was ten when he gave that speech,” she says, “I went to school and got called more names. Today my daughters ask me ‘who is Enoch Powell?”

Birmingham Edgbaston MP Preet Gill highlights the hard work and contribution that generations of migrants have made to the city. He parents came to Birmingham from India and he father found work driving the city’s Number 11 bus. The depot where he would start his route each day is in the constituency that Gill now represents in Parliament. Ian Ward, Leader of Birmingham Council, underlines Gill’s point. “If you want proof that Enoch Powell was wrong,” he says, “Come to Birmingham.”

But all are keen to point out that while we should celebrate progress, that cannot be cause for complacency. “I’m proud of what we’ve achieved but we still have a long way to go,” Eleanor Smith tells the audience.

Back in Wolverhampton, I meet Arten Llazari, CEO of the Refugee and Migrant Centre, Black Country and Birmingham. The building is bustling with families and individuals getting advice on their immigration and asylum cases, help with accessing services, learning English, writing CVs and applying for jobs. Today is a quiet day, he says – they often have around 150 people through the door in one day.

Llazari feels little need to “pick at the scab” of a speech given by the local MP half a century ago – his concern is for people in Wolverhampton today. The RMC has been handling the cases of ‘Windrush Brits,’ unfairly denied access to the NHS, stopped from working or even held in immigration detention, for many years. He’s puzzled why their horrific stories have taken so long to come to the country’s attention – and worried for those whose stories aren’t quite so media-friendly.

Up the road in Wolverhampton’s Whitmore Reans, the children of West Park Primary school are marking this moment by performing ‘West Park Welcomes the World’ – a multimedia performance telling the 50-year history of the school, including the unwelcome attention received after its diversity was highlighted by Powell. There is acting, singing, films, shadow puppetry and even a pantomime elephant. Former pupils like Angela Spence, aged five at the time of ‘Rivers of blood’, are part of the performance too. Many more are in the audience. We start with the reminiscences of old-timers who recall playing in streets devoid of cars and their shock at seeing the city’s first black and brown faces; to the racism stirred up by Powell’s speech; and then her of West Park’s role now as a ‘School of Sanctuary’ that welcomes refugee children. It’s funny, entertaining and moving. I was expecting to hear about a political speech and instead I learned about the history of a whole community.

Driving through Whitmore Reans on my way back, my taxi driver Errol, ‘Wolverhampton born and bred,’ gives me his own, personal  history of the area and how it, like the school, has left Enoch behind. “This is Reans. There isn’t a nation you won’t find represented here. When my dad first came here [from the Caribbean] this was the only place you could get a room if you were a black man. Now, there isn’t a part of this city I can’t go to. And the woman that bought Enoch Powell’s house was a black woman. Big house. I used to play there when I was a kid.”