First-time voters in the 2015 General Election are standing behind Britain’s commitment to welcome and protect refugees, according to new polling carried out by YouGov. The polling, which is released today to launch Refugee Week, reveals that eight out of 10 of first-time voters are proud of Britain’s tradition of protecting refugees and three quarters want Britain to keep up its role of offering a safe place for people fleeing violence, war and persecution. Support for protecting child refugees is strongest of all, with 82% of those in “Generation Welcome”, as they have been named, backing Britain’s protection of child refugees. 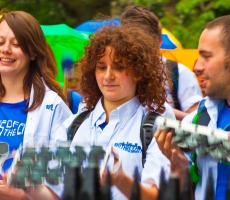 While first-time voters are more welcoming towards refugees than their parents or grandparents, pride in this country’s tradition of offering people a place of safety remains strong throughout the population, with almost seven in 10 (68%) saying that Britain should be proud of our nation’s history of offering protection to refugees. Just 15% disagree.

“Our heritage of offering safety to those in need is just as vital today as it was in the past,” says Refugee Week’s Chair, Refugee Council Chief Executive Maurice Wren, emphasising how the YouGov findings challenge any fears that Britain’s commitment to refugees is weakening.

British Future is joining some of Britain’s biggest charities, including the British Red Cross, Amnesty International, the Children’s Society and Refugee Council, to call on political leaders to reconfirm their commitment to refugee protection as part of Refugee Week.

Maurice Wren added: “Protecting and helping vulnerable people is an intrinsic part of being British and the message from ‘Generation Welcome’ to politicians is clear: they are proud of Britain’s long history of protecting refugees and want it to continue. Shrewd politicians would be wise to listen and confirm their commitment to refugee protection.”

Refugee Week 2014 takes place between 16th and 22nd June. This year will see events happening across the country to celebrate the contribution that refugees make to Britain, starting with the Celebrating Sanctuary festival on London’s South Bank on Sunday 15th June.

Nineteen-year-old Gulwali Passarlay, for example, will talk about how he started a new life in Britain upon fleeing Afghanistan in 2006. After a harrowing journey overland to reach safety and find his uncle in the UK, Gulwali threw himself into life here. Gulwali is studying politics and international relations at the University of Manchester and currently campaigns to improve the lives of refugees and young people.

“The UK gave me safety and protection which means everything to me. I hope that by telling my story, that I can help other children fleeing war, violence and persecution,” he said.

To find out more information on Refugee Week 2014 click here.