Britain is a fairer and less racist country than it was when Stephen Lawrence was murdered 20 years ago. But there is good sense, too, in the public wariness of over-claiming how much has changed, writes Sunder Katwala.

One thing that made the Lawrence case distinctive was that it took long-running themes – such as unfair policing and racial discrimination – to an unusually broad audience. “It was the first time that Middle England saw an injustice through the eyes of a black family,” journalist Brian Cathcart told British Future’s citizens’ jury on this topic in Eltham last week.

That effect is captured in polling carried out for British Future by BritainThinks, published in the report The Integration Consensus 1993-2013: How Britain changed since Stephen Lawrence. For example six out of 10 people endorsed the view that there was “a genuine problem of deep-seated and widespread racial discrimination in the police.” Only 7% reject that proposition. A significant minority remain on the fence, perhaps reflecting uncertainty about how widely spread the problem was. The public salute the campaigning efforts led by the Lawrence family and the importance of the media, bringing the case to public attention. 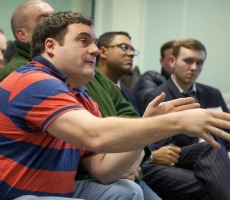 A British Future workshop and debate in Eltham

Six out of 10 people are hopeful that a similar case would see a more effective, fairer and less discriminatory response today, though that falls to 50% among non-white respondents. Only 35% of ethnic minority respondents think policing is generally fairer today. This reflects a sense that police efforts to change needed to be faster to secure confidence from the black community.

How well do these public perceptions match the reality? In some areas, it is possible to point to clear evidence of progress towards a fairer society.

There were only six MPs from minority backgrounds in 1993; at the last election, we saw progress speed up, with the number of non-white MPs doubling from 14 to 28, as both the Conservatives and Labour made progress, breaking the pattern of ethnic minority.

Overt public racism on the football terraces is now confined to a handful of idiots, quickly ejected, with games against Italian clubs sometimes now providing echoes of the bad old days of monkey chants and banana throwing in stadiums. Perhaps the bad behaviour of highly paid footballers, failing to provide role models, may explain why a significant minority do not think racism in football improved.

In other areas, the record is more uneven. The stop and search figures have not improved, with black people many times more likely to be stopped. Richard Stone, adviser to the Stephen Lawrence inquiry, argues in his new book on the subject that efforts to diversify the senior ranks of the police are stalling and risk now going backwards.

The public express the lowest level of confidence that hate crimes are less likely today. This partly reflects more general fears of crime. However, the growing awareness of hate crime, and the willingness to record it, can see an increase in crime statistics as a result of laudable attempts to get a grip on the problem, rather than a worsening reality.

On balance, the majority view that racism, generally, is lower today than in 1993 is well-founded. There are many public anxieties about how we handle issues of diversity, integration and immigration, but there are considerably lower general levels of prejudice, particularly among younger Britons, than there were 20 or 30 years ago. It is hard to imagine that less than half a century ago, in 1964, a mainstream political party candidate was elected with a campaign slogan against people who “want a nigger for a neighbour”.

But hate crimes still take place and Stephen Lawrence was not the last victim of one in Britain. As playwright David Edgar notes, “there have been 96 racist murders since Stephen Lawrence’s, all but four from minority communities.” There is no doubt prejudice still exists, even if the main targets change. While prejudice against blacks and Asians has fallen, a majority of people say there is a lot of prejudice against Muslims today. Concern about the way Eastern Europeans are talked about has also risen in light of large-scale Polish immigration since 2004.

There is public uncertainty about whether we will continue to make progress, with only one in five expecting further progress over the next five years and a slightly larger number thinking things may get worse. This reflects a broader truth: there is nothing automatic. It depends on which choices we make, and especially on whether we can find approaches to contested issues about identity and integration which bring us together, locally as well as nationally, and which reject the calls of those keen to divide places between groups with competing grievances.

This polling forms part of a report entitled The Integration Consensus 1993-2013: How Britain changed since Stephen Lawrence.

Watch a video from our event in Eltham here:

Check out images from our Stephen Lawrence: 20 Years On event below: