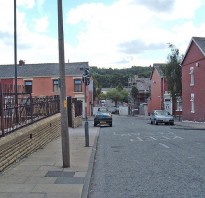 When people talk to me about the pace of change to communities in Britain, writes Avaes Mohammad, harking back to days when you could leave your door unlocked, I think back to my own childhood. That was the reality in which I grew up, where we children roamed freely between neighbours’ homes, deep in the Lancashire hills. As teachers taught us our town’s proud industrial heritage where every house was once a mini-factory, I’d return home to live that reality too as my mother sewed cloth and my father and I would cut the threads.

Yet it also felt like a mini-India or Pakistan. For this was Blackburn, separated from the rest of 1980s Britain by place, race and culture. Except for perhaps a single white family per street, every house was occupied by South Asians.  All meat was halal and every grocer sold the curry essentials.

I’m never surprised to read about Blackburn in the newspapers today.  No doubt coverage of the new Casey Review will follow Ted Cantle and Trevor Philips in seeing my town as the symbol of parallel lives and segregation in Britain.  While I might differ over some of the analysis, I certainly share their concern.  Today Blackburn doesn’t just maintain those divisions. It feels as though they’re set to deepen.

Yet I enjoyed a truly precious childhood there, consisting of school during the day, madrassa, or Qur’an school, in the evening and playing the South Asian street game Galli-Danda, a kind of cricket but with sticks.  By the time I was five I was fluent in English, Gujerati and Urdu, as well as my own mother-tongue, Kutchi.

My parents were wise to ensure my primary education was delivered at an all-white school on the other side of town.  Otherwise my only interaction with white England would have been at the hands of local National Front skin-heads who would stomp through our streets to touch up their graffiti and steal our toys.

Any single day would see me navigate through several different cultures.  At school, teachers had been told to instil in us our sense of Britishness while the mosques wanted to ingrain an untainted South Asian version of  being Muslim. But the streets in which we played, with no-one to watch over us, saw a third culture evolve where English was woven with Gujerati and Punjabi, referencing terms from all our worlds in a single sentence fully discernible to us alone. What none of us children could know however was how significantly our presence would go on to feature in our country’s anxious integration debates.

Thirty years on, Blackburn hosts the highest proportion of Muslims outside of London.  People often – and rightly – observe that integration is a two-way street. Segregation into parallel lives is too. It was a running joke that the arrival of a South Asian family caused every other house in the street to go up for sale.  It would have been funny if it wasn’t so true.  Whether from fear or ignorance, local white families fled leaving whole new communities to be formed in the voids they left behind.

The preference for ‘avoidance’ over ‘acceptance’ had plenty of South Asian fans too. Those who had come as economic migrants from rural backgrounds were often mainly motivated by making money to be sent ‘back home’.  Many had extravagant houses built in their native villages and towns in the (increasingly implausible) hope they would one day return.

I first left Blackburn aged 19 for university in Manchester and now live in “that London”, while my parents still live in the house I was raised in.  I get back to Blackburn every month and so the town remains an important part of my life.

So for Blackburn, the Casey Review will need to do more than simply telling us that the issue of integration remains as significant as ever.  You can tell that from Google maps alone. An aerial view of the town clearly exposes the demarcation of territory: proud minarets that clash against the valley’s red-bricked landscape stand as flagpoles; domes as flags.

After three generations here, it can’t be denied that the challenges facing Blackburn’s Muslims come from within as well as without. Conflicts from the sub-continent arrived as baggage with the first generation. Committees elected to govern mosques largely operate by an unwritten code ensuring formal membership remains for particular national and even regional groups only.  Separate mosques exist not only for Muslims of Indian and Pakistani heritage, but also to accommodate regional differences from the motherland.

That this system still exists, despite significant numbers of British born and educated Muslims, is what’s most alarming.  Does it imply that the British born generations are set to simply inherit these questionable tribal norms or rather, that they have no influence whatsoever over their elders?

Either way, it is a failure of leadership.  Elected Mosque Committees have historically favoured Imams from the sub-continent who can lead formal prayers perfectly well, but have no understanding of their congregation’s lived experience.  So Mosques can struggle to engage and undertand the community’s contemporary issues of marital breakdown, domestic violence, abortion, gangs and drugs. Brushing these issues under the carpet allows the collective illusion of outward piety and ideal Islamic living to be maintained, even if it may be a pretence.

Some of us did get to engage with broader world, but often by escaping town.  Yet if real community change is to be successful, it’s those who remain and work within the community we need to look to.

A new local organisation, the Abu Hanifah Foundation (AHF), was set up in 2011 by young local professionals to create the next generation of madrassa. By combining British education standards with a holistic approach to Islamic education, this institution is beginning to create an environment where their children can feel both confidently Muslim and comfortably British.

Here, not only do pupils gain understanding of the Quranic language; they are also offered a broader, holistic programme of study that includes active involvement with the Scouts, Cubs and Beavers programmes. Their football club AHF FC won the National F.A. Charter Standard Football Club of the Year award in 2015. This madrassa not only ensures their pupils regularly engage with wider society, but so do the parents who cheer and support together from the sidelines.

This model madrassa has created ripples of change among similar institutions across the country, creating new generations of British Muslims more at ease with the range of opportunities available to them in contemporary Britain. The need for progressive change is recognised by some of Blackburn’s Muslims and their initiatives need to be celebrated and supported.

My memory of 1980’s Blackburn is of an exciting and inspirational place in which to grow up; rich with community spirit and the opportunity to absorb from a spectrum of cultures and ideas, if you had wanted to.  My schooling in an all-white primary school enabled me to have white English friends, through whom I discovered a culture and way of life quite different, though equally valuable, to that of my parents.  Comprehending this wider horizon left me better prepared to grasp the opportunities of our multi-ethnic, multi-faith society, and not just my own little corner of it.

Returning each day to my neighbourhood didn’t just provide a sense of heritage. It offered security and protection at a time when we were at our most vulnerable.  It wasn’t until adolescence that I even knew what the letters N and F, painted all over our walls, ever meant.  The contrasting experience of those who were adults at that time – mocked, attacked and insecure – may have provoked a retreatist mentality so embedded that they’ve never been able to advance back out of it.

Blackburn is changing, though not as quickly as most of us would want.  The Casey Review hopes to speed that up. Efforts to do so must be grounded in an understanding that the most effective agents of change are to be found within the community itself. It’s the local changemakers who are best equipped to win local support and so take their communities with them towards a more positive cultural development.

Those who ran around the streets with me as children are now the thirtysomethings of Blackburn.  As parents, teachers and policemen, they’ve become the pillars of our community. They want to be the changemakers Blackburn needs, even if some of our community elders would rather they wait their turn.

Fully aware of the work they have to do, they don’t need a lecture from Government or media about the issues the town faces. They do, however, need their acknowledgement and support; and with that backing could be the best local allies our national leaders could wish for. They will be needed if we’re to  tackle our shared challenge: ensuring that future generations understand the opportunities this country presents, the contribution that entails, and the stake they have in Britain.

Avaes Mohammad is a researcher at British Future and coordinator of the Unknown & Untold project to highlight the contribution of Muslim soldiers to Britain in the First World War. An edited version of this article first appeared in the Daily Telegraph.