Is the EU referendum any business of business?

As Prime Minister David Cameron, speaking at the World Economic Forum, calls on business voices to back the campaign to stay in the EU, some companies will take this as the green light they were waiting for to start campaigning to stay. Others may be planning to encourage people to vote the opposite way. But many business voices will still be feeling uncertain whether it’s worth the risk of saying anything at all. The debate on Britain’s membership of the EU, writes British Future trustee Simon Clark,  looks set to dominate the politics of 2016. Can the business community sit out the EU referendum until it all blows over?

Many would like to do just that: a July 2015 survey from ICSA found that while two-thirds of businesses think their interests would be adversely affected by leaving the EU, only 7 per cent planned to speak out in the referendum.

This may prove a forlorn hope. Thoughtful business leaders should prepare now in case they need to get involved in the debate after all. A new publication fromBritish Future, ‘How (not) to talk about Europe,’ argues that there is a clear, useful role for business to contribute to an informed debate on Europe. 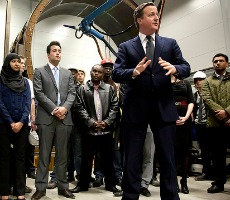 The desire to steer clear is easy to understand. There is plenty of risk in getting involved in such an emotional, partisan and polarised campaign. Some feel that business lost its right to comment on public matters after the crash and no sensible executive wants to get into a political argument if it can be avoided.

Others recall unhappy memories of the hard-fought independence referendum in Scotland.  Many businesses had hoped to stay out of the debate, keen not to alienate customers and employees on either side of the argument. But ever tightening polls saw a last minute clamour to get involved. It isn’t clear how much difference the panicky reaction had on the decision of the Scottish voters, but it certainly caused exactly the public pain that business had sought to avoid.

Those bruised by that experience hope to avoid it – yet may risk repeating it. In a vote, like the European referendum, in which the economic aspects of the choice are of central importance, campaigners on all sides are going to try to show business support for their point of view. Voters are going to want to know what their choice will do to their own financial prospects and those of their community. It is reasonable to think they may look to the business community to help them decide.

Attempting to avoid the debate will only disappoint shareholders, customers and employees who expect straight answers to reasonable questions – about the impact of the choice ahead on individual companies, jobs and the wider economy.

The question should be one of how business can engage on the right terms.

The business community will need to understand what voters want to know from them, what business can tell them, and how to get the message across. That is not work that can be rushed in a last minute panic. In any case, as the referendum draws nearer, boards will need to decide what, if anything, they want to say about the issues that the campaign will raise, and they will need serious analysis to make a sensible decision.

Business has a legitimate role in the public debate as a trusted voice on jobs, growth and investment and it should stick to those areas where it has a locus of expertise and credibility. It can also, in this capacity, help to identify the questions that need to be answered about what ‘In’ or ‘Out’ will mean.

The voters who will determine the result of this referendum are those who are currently undecided – what my colleagues at the British Future think-tank have dubbed the ‘anxious middle’. It is the legitimacy of the business voice with this group, not with the passionate Eurosceptics nor the pro-Europeans, which should guide how business engages in the debate. These are not ideological voters; the practical consequences of their vote will determine their decision. They are less likely to trust the campaigners and they will be looking for accurate and neutral information from sources they can believe.

This is where business will need to play its part. But there is a challenge here: not only does business need to find out what the voters want to know, it also needs to find ways of communicating effectively with them. This is quite different from traditional public engagement, and companies need to start preparing now. Many companies will take note of Sajid Javid’s advice to avoid taking a position until the renegotiation is complete, and they can use what remains of the renegotiation period to carry out the research and plan ahead.

Business should not presume to tell voters how to vote – and of course there will be business voices on both sides of the debate. The referendum will not only be about the economy: it will also about identity, democracy and sovereignty – and many other issues on which business can claim no special standing or expertise. But the impact of this choice on Britain’s economy is the business of business – and so business leaders owe it to all they serve to bring their distinctive expertise to bear in this debate.

Simon Clark is the former Chairman of the British Venture Capital Association, a tech investor and a Trustee of British Future. A version of this article first appeared in Public Affairs News and City AM.