100 years ago Britain welcomed Belgian refugees to our shores

100 years ago today, the first of many Belgian refugees fleeing the German invasion began to arrive in Britain. It was to become the largest ever single refugee flow from one country to the UK, with over 250,000 Belgian refugees, many of them children, arriving on our shores, writes Joe Cryer. 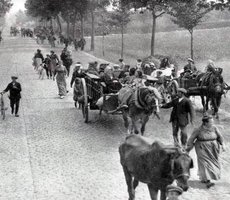 The BBC is marking this day with the launch of a new guide that tells the touching story of the Belgian refugees, and of the British people who welcomed them to their country and their homes.

Stories of German atrocities made their way across the Channel and the plight of the Belgians generated popular support for the war. The British people admired Belgium’s resistance, and for many who could not enlist, helping and housing the refugees was their way of contributing to the war effort. The War Refugees Committee set up receiving centres across the country, and thousands of Britain’s offered accommodation to the Belgians.

Many of the refugees also contributed to the war effort, working in the steel and textiles industries as well as in agriculture. In fact, 1915 saw Belgian refugees who had fled to the Netherlands being invited to relocate the UK to prop up faltering munitions factories. In some cases, factories were entirely run and staffed by Belgians.

Yet surprisingly, the story of the Belgian refugees is little known by the British public. A YouGov survey in June this year for Refugee Week, which celebrates the contribution that refugees have made to this country, asked people what the biggest single flow of refugees to Britain from one country was. Despite it being just one of seven options available, not one person said Belgian refugees in 1914. A fifth (20%) guessed it was Ugandan Asians fleeing persecution by Idi Amin in the 1970s, and another 17% said Jewish refugees fleeing Nazi-occupied Europe in WW2. Yet this story of Britain’s greatest-ever act of protection and welcome is relatively unknown.

While many in the UK have little knowledge of the story of the Belgian refugees, one of them, a retired Belgian policeman, was likely the inspiration for one of British TV’s best loved characters, Agatha Christie’s Hercule Poirot. David Suchet, the actor who brought Poirot to life on our TV screens, spoke about the iconic Belgian detective earlier this year in support of Refugee Week: “He had that gritty determination shared by so many refugees as they try to make a new life for themselves after fleeing persecution.”

But the presence of so many Belgian refugees in the UK was not without its problems, and there were occasional reports of tensions between the British and Belgian communities: a fact that is perhaps not surprising. After all, the introduction of a quarter of a million refugees to the UK will always generate some tension or another in the communities where they settled in large numbers.

Yet those tensions were managed and the people of Britain extended their help, and opened their doors, to those in dire need. It is this compassion that the British public still holds in high regard today. Polling in June this year revealed that over two thirds of the population are distinctly proud of Britain’s tradition of protecting refugees, and most want us to continue offering a safe place to those – especially children – fleeing war, violence and persecution.